An all-steel 60’ diameter and 60 foot tall 12-sided tepee is now located in Chard, Alberta Canada. Chard is in the far northern reaches of Alberta. 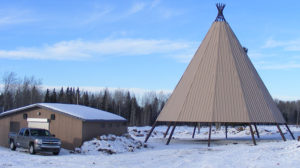 The large tepee serves as a focal and destination point for the Chipewyan Prairie Dene First Nation tribe. Pat Zelenak with Playworks, Inc. located in Edmonton, AB Canada came up with the idea of creating the structure.

The  60 foot tall tepee serves as a picnic shelter, entertainment pavilion and pow wow area.  It has a large fire pit located near the front.  Native scenes are painted on the steel walls/roof of the tepee.  This

tepee is thought to be the largest fully covered tepee in North America, if not the world.

The Dene First Nation is an Athabascan speaking people which call themselves “Dene”, meaning “The People”.  The Dene has been in the Athabasca region for thousands of years and were hunters and gatherers migrating with the Baron Caribou.It is believed that some of the Dene people migrated south to the United States and became what is now known as the Apache and Navajo nations which are now largely located in Arizona.

It seems only fitting that this one of a kind tepee has been created and fabricated from a company in Arizona and is being installed in the north for the Dene People. Classic Recreation Systems, Inc. is proud to be a part of this ancient history and hope the Chipewyan Pairie “Dene” First Nation people will enjoy this unique structure for years to come.